Bob King can’t quite pinpoint the moment when he fell in love with astronomy.

There was that one lunar eclipse when he was 11, but it was more of a feeling he always had than anything else — an innate need to look up at the sky and see the entire universe staring back at him.

"The first time I saw Jupiter,” says King, “and Saturn — this little, tiny ball with satellites around it — is still really clear in my head. So is the time I looked up from my bedroom window and saw the three stars of Orion’s Belt right over my neighbor’s roof. That was a big moment for me."

King’s first telescope was a “tiny little reflector” his parents bought for him — good enough to tide him over for the taut mount and six-inch scope he’d soon buy with a year’s worth of paper route savings. His passion for the night skies also spilled over into pencil sketches of the planets, several magazine subscriptions, and slowly exposed shots of star trails, eclipses and the sun.

Although he considered becoming a professional astronomer, the computer science, physics and math requirements at the University of Illinois were daunting, so he got a degree in German studies and became a hobbyist instead. He has been writing an astronomy column for the Duluth News Tribune for decades and has authored several books on the subject, including the particularly helpful Night Sky With the Naked Eye.

“Astronomy is totally open to being interpreted,” explains King. “If you understand a concept well enough, you can usually put it in terms that anybody can understand. It’s what Carl Sagan was so good at; he’d take the most obscure ideas, and people would walk away and go, ‘I think I know what a black hole is.’ It’s all accessible.”

While he technically retired in 2018 — MPR did an entire segment about it — King’s compelling “Astro Bob” column is as active as it’s ever been. He typically files three pieces a week and sometimes writes a fourth or fifth post for his own blog. His webinar series for Voyageurs National Park also went so well during the pandemic that he’s now writing a monthly calendar of astronomical events for the park’s newsletter.

Such is life for a natural born astronomer based in Minnesota, a state with two emphatic stamps from the International Dark-Sky Association: the newly anointed Voyageurs and the Boundary Waters Canoe Area Wilderness, which was declared the world’s largest dark sky sanctuary in 2020.

King notes that the dark skies in places like these, far from the light pollution that surrounds cities, used to be the sky everybody saw. When you get away from the cities, “You just look up and go, ‘Wowwww,’ he says. “Voyageurs is top-notch; it gives you the impression that the stars are uncountable.”

In honor of International Dark Sky Week, a flurry of recent astral plane activity and the growing interest around amateur photography and natural phenomena like the Northern Lights, we asked King to break down the ins and outs of astronomy for beginners, starting with the simple principle that’s guided his own stargazing over the years.

The main thrust of my writing is to get people outside — to really set an hour aside and look at this meteor shower or that eclipse.

I’m a real believer in providing a few facts behind it, too. You can admire just about anything on the surface; like you can enjoy a flower simply because it's pretty. But if you know something about the habits of that flower, and what pollinates it when it comes up, that intimate knowledge really adds to the experience.

Depending on the season, you’re probably going to freeze your butt off for an hour or get bit by a mosquito. Those are the two big drawbacks with being an amateur astronomer — the cold and the bugs. The solution? Dress for the weather and bring bug spray. I promise it’ll be worth it.

3. The darkest skies are not seen during the depths of winter.

The brightest stars in the sky are in the wintertime, but contrary to popular belief, that’s not when the darkest skies of the year are. They’re during the summer and fall because of light pollution. Today’s LED technology is very bright; the lights reflect off the ground and back up into the sky. And when the ground is covered in snow, the difference is enormous.

4. Spring and fall are best for spotting the Northern Lights.

It has to do with the orientation of the sun; it’s tilted a little bit on its axis, and the solar poles are tipped more in the direction of the earth. Material coming from those regions has a better chance of hitting us and hooking up with our magnetic field and producing Northern Lights.

The best time is usually March/April and September/October. I would plan a trip to Voyageurs sometime between the last quarter moon and the first quarter moon. So right around the new moon, when there is a crescent in the morning sky right on through the evening. Make sure that at least part of your trip is planned for dark sky viewing at that time.

Voyageurs is perfect for watching a meteor shower. Under those dark skies, you’ll see three times more meteors than I would ever see here in Duluth. There are certain showers that are really, really good — very reliable. If you go when the moon is not near full, you'll get a great show.

You might have to wait a bit for the show to start, so download an app on your phone [BAE(1] that shows you the night sky. I use a free one called Star Chart. You can hold it up and learn about the constellations and stars and planets while you're waiting.

There are about half a dozen meteor showers a year that have specific dates. The best one in 2022 is going to be the Geminids. That occurs in the middle of December. I just love the Geminids; they're such a nice, rich shower.

The other things you can plan for this year are the eclipse of the moon on May 15 and November 8. You can watch an eclipse from downtown Minneapolis no problem, but if you’re out in the countryside, you get that extra dimension when the moon is totally eclipsed. The sky is dark, and all the stars come back, and the moon looks kind of three dimensional. You could plan a trip to Voyageurs for the eclipse since any astronomical event will be enhanced by a dark sky.

Conjunctions are when you look across the solar system and see, let’s say, Mars in the foreground. And it happens to be in the same line of sight as Jupiter in the background. From our perspective, it looks like two objects — two bright planets — are right next to each other in the sky, which is really striking to see.

We have a great conjunction coming up on April 30. About an hour before sunrise, low in the southeastern sky, Venus and Jupiter will be super close. You’ll look and you’ll see Venus — it’s really bright — and then you’ll be like, ‘What is that other thing right next to it?

If you want to plan a little farther out, there’s also a fun thing happening in June. All of the planets will be in a long arc in the morning sky at dawn — Mercury near the horizon, then Venus, Mars, Uranus, Jupiter, Saturn, Neptune…. That doesn't happen too often.

One other thing I wanted to mention is the morning of May 31st, right around midnight, some astronomers are predicting a very rich meteor shower from a comet that broke apart a few years back — the Tau Herculid. How about that for a name?

8. Leave the expensive equipment to the experts.

Almost all the things I write about can be seen without equipment. If you want one piece of equipment to keep with you whenever you go, make it a pair of binoculars.

I also recommend visiting a site called Sky Maps. Every month, they have a new chart of the night sky — a map you can print out and use the old analog way. The best part of that site is the list of events you can see with the naked eye. Just pin it up on a cork board and you've got your guide right there. Or you can just go to the Voyageurs site every month. I personalize it so it's more regional.

9. Switch your point-and-shoot with a smartphone.

If you use the night photography mode on a newer phone, you can take lovely pictures of the Northern Lights. I’ve seen some really nice images.

The one key thing with a cell phone is to have a tripod or some way to mount the phone so it's still during the exposure. It might be as simple as just rigging something up with Velcro. As long as you can see and compose the picture, then you're good.

They also make inexpensive tripod mounts for cell phones. You can just get one of them and you're ready to shoot, provided you have more of a modern phone. If you do, just go for it. Put it in night mode, make sure it's mounted with one of those brackets, and play.

Older phones allow you to capture moon rises, crescent moons and bright conjunctions.  And new phones can capture the Northern Lights, constellation photography, and even the Milky Way if you're in a dark sky place.

If I was just starting out and wanted to go high end right away — not messing with cell phones — I would get a mirrorless camera because of its electronic viewfinder. That thing shows the sky the way you see with your eyes, so it's very easy to compose a photograph and focus. And that's the key when you are photographing the night sky; you have to manually focus because cameras can't focus automatically on stars like you do during the daytime. They seek to focus and they miss. Usually, you have to put everything in manual and use the Live View button.

That’s the number one thing you have to learn when it comes to doing any nighttime photography:  Everything must be done manually. You've got to focus on a bright star to make sure your pictures are sharp, then you're set for the whole night and can do anything. 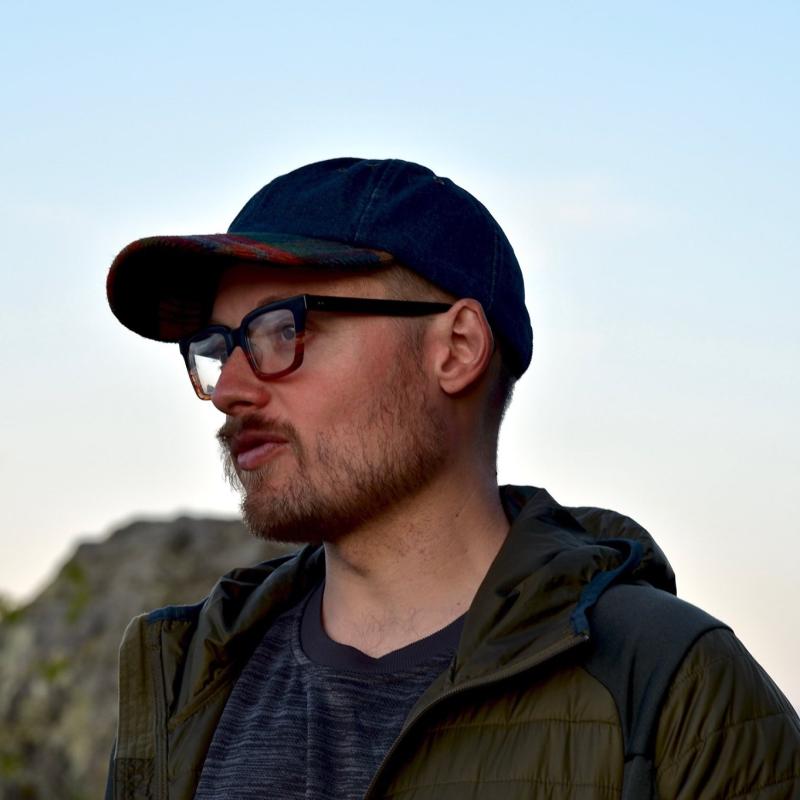 Andrew Parks is the multimedia editor at Explore Minnesota. His past lives include copywriting and content strategy for such clients as Food & Wine, Apple, Condé Nast Traveler, Bandcamp, AFAR, Bon Appétit, and Red Bull.

END_OF_DOCUMENT_TOKEN_TO_BE_REPLACED

The Prettiest Places to Hike in Minnesota in Fall