In 1998, my family rented a cabin on Lake Superior for a weekend, and we drove up to Lutsen with my mom’s sister, her husband and their three boys.

It was just barely autumn, the air still warm enough to melt a popsicle onto my fingers faster than I could eat it and require window fans and summer jammies at bedtime. When we arrived and I hopped out of the car, I saw the lip of the yard open onto a broader expanse of water than I’d ever seen, and I thought we’d driven all the way to the ocean. Home felt so far away.

This was among our first family vacations, and the idea of a road trip held some new promise—it was a brand of vacation neither my mom nor dad, whose parents didn’t drive, had experienced as kids. When my parents were young, “going out of town” invariably involved a sweaty bus ride to stay with relatives somewhere not terribly far away. For my mom, who grew up in Minneapolis, this meant boarding a Greyhound every summer to visit her cousins’ farm in Wisconsin. For my dad, in Guizhou, China, it was two days aboard sleeper trains and cramped buses to get to Chongqing for Lunar New Year.

Going “Up North” was a novelty for our young family, and my mom pulled out all the stops to give us all the postcard-perfect Minnesota vacation she never had as a kid.

On our way up, we pulled off I-35 in Hinckley to share a giant cinnamon roll at Tobies. At Lutsen Mountains, we rode a chairlift to the summit, inhaled the view and then careened through lush Northwoods greenery down the Alpine Slide. We hiked a modest stretch of the Superior Hiking Trail and picnicked at an overlook. We perched on the rocks that flanked the shoreline outside our cabin, dipping our fingers and toes into water so cold it felt sharp. We toasted marshmallows around a bonfire after dusk and gazed at the stars out over the lake.

To be honest, I don’t actually remember much of this vacation at all. I was four. Most of my memories are half-fictions spun from stories I’ve been told and brief flickers of sensation: falling asleep in the car and waking up sweaty, wailing while my dad tweezed a splinter from my palm, frantically extinguishing a flaming marshmallow.

Most of all, though, I remember the bird.

On the morning of our last day in Lutsen, a wayward sparrow flew into the glass of the kitchen window and collapsed in a heap on the front porch. I don’t remember the crash itself, but I remember the sudden air of urgency in the house. As the other adults peered out the window and fretted over the injured creature, my dad’s curiosity lit up, cutting through the end-of-vacation malaise. I watched as he ventured out onto the porch and approached the little bird, which was now standing dazed, silent and still.

My dad is a man of insatiable curiosity, and never more so than on vacation. Family vacations overtake him with an unbridled wonderment that’s bafflingly childlike: A decade later, during a road trip in the Pacific Northwest, I’d watch my dad select a damp stalk of seaweed from an Oregon beach, wonder aloud whether it was edible, and bite into it while my mom shrieked to put it down.

He isn’t always like this at home. His risk-taking spirit and expansive imagination are the qualities that fueled my dad’s immigration to the U.S. from China when he was 23, but at home he tends to apply these to headier pursuits. He’s an absent-minded professor type, a wearer of socks with sandals and deliverer of impromptu dinner table lectures on particle physics. When I was growing up, it wasn’t uncommon to flip over a crayon drawing I’d done to find that my dad had used the backside as scratch paper for a calculus problem.

On family vacations, though, he becomes a purveyor of fun to the point of mischief. There’s no question that my mom is the brains of the operation—building a budget, packing our suitcases, drawing up itineraries. My dad’s self-appointed role seems to be to remind us (especially me, the most skeptical and self-serious of his kids) that waking to find the world bigger than it was yesterday is an adventure to be seized, not a crisis to be fretted over.

My dad’s renegade inquisitiveness can make him a bit of an odd duck among my mom’s side of the family.

My dad’s renegade inquisitiveness can make him a bit of an odd duck among my mom’s side of the family. The Reselands are lifelong Scandinavian Minnesotans, gentle folks with mild sensibilities. When my mom’s family all gets together, it’s called “visiting.” But my dad doesn’t “visit.” He debates, opines and tinkers. Sometimes I wonder if he leaves this side of the family at a loss on how to respond to his whims.

That last day in Lutsen, though, my dad’s curiosity was infectious. All of us kids gathered to join my dad on the porch as he inched up close to the wounded sparrow. It didn’t budge. It was so uncannily still that it looked, to me, like one of the stuffed specimens in a Bell Museum display.

“Its wing might be broken,” my uncle Dave suggested, observing the situation from a far more reasonable distance. “Otherwise, you’d think it’d fly away, being approached like that.”

We fetched the bird a little cup of water, proffered a few sunflower seeds angled from a bag of trail mix. The suspense of its stillness could have been boring; instead, we were enraptured.

My mom had thought we’d spend our final hours up north playing by the lakeshore or taking one more hike, but none of us were interested in doing much besides watching my dad nurse the bird back to health. We kept watch all morning, curious to see if it would drink the water (it did) or eat a few sunflower seeds (it didn’t). When it finally broke its silence and let out a chirp, we squealed with excitement. “It got its voice back!” my cousin Jared reported triumphantly to the adults. It felt almost as though the bird had died and we were watching it come back to life.

My dad is not what I’d call a nature guy, but he is fascinated by birds. When I ask him what he remembers about this slice of our vacation, he gets the pensive, faraway look in his eye that I recognize from when he’s puzzling through a mental math problem. “Birds are very moving to me,” he tells me matter-of-factly. “They’re just so free.”

The first time my dad flew was in 1987, when he boarded the plane that took him to a PhD program in the American Midwest. My dad had long yearned to leave China, and winning a student visa was his ticket out of an uninspired future in a nation he resented. An uncharted world opened up to him as he soared over the Pacific Ocean, flying away from the political tragedies that had haunted our family and approaching a place that promised him freedom.

“As long as a bird can fly,” my dad told me the other day, “it has nothing to worry about.”

But would the bird fly? Could it? As the morning wore on, this question became increasingly urgent. How could we possibly go home before the bird had made a full recovery?

“Maybe if I can get it to sit in my hand, I can help launch it,” my dad pondered. The other adults implored him not to, but the idea had set in and my dad couldn’t be convinced not to try. We all watched apprehensively as he extended a hand outward. And with perplexing ease, the little bird hopped right into his palm.

My parents had purchased me a kiddie camera to clumsily document my vacation experience, and I snapped a picture of my dad through the screen door of the cabin. The resulting photo is so underexposed that my dad appears in silhouette: squatting on the porch, the sparrow perched in his upturned palm. The bird, too, is in profile—a little shadow of a thing, with its head tilted up and beak hinged open, as though returning my dad’s awe.

What is it about vacation-made memories that makes them feel somehow destined, miraculous and revelatory? Maybe being away from home reawakens us to the bigness of the world, convinces us for a moment that everything is new, is special, is our own.

When the bird finally did fly several hours later, it felt like magic. Just as it had appeared as a mess of feathers at our door, it was suddenly ready to go. It flitted from my dad’s hand to the railing of the porch, testing out its wings, and we all watched as it prepared to head back out into the world. I don’t think birds are anatomically equipped to move their heads this way, but I imagine it giving us a small backward glance before flying back off to wherever it had come from—or maybe somewhere new.

The triumph I felt at the bird’s flight quickly curdled into something sharp in my chest; I hadn’t expected to be able to keep it, but I wasn’t prepared for the loss I felt when it left. Much like the cabin, the weekend and the lake itself, it wasn’t ours anymore. On the phone with my dad the other day, I ask if he felt the same way.

“Of course not,” he says, and chuckles at my sentimentality. “A bird is meant to fly.” 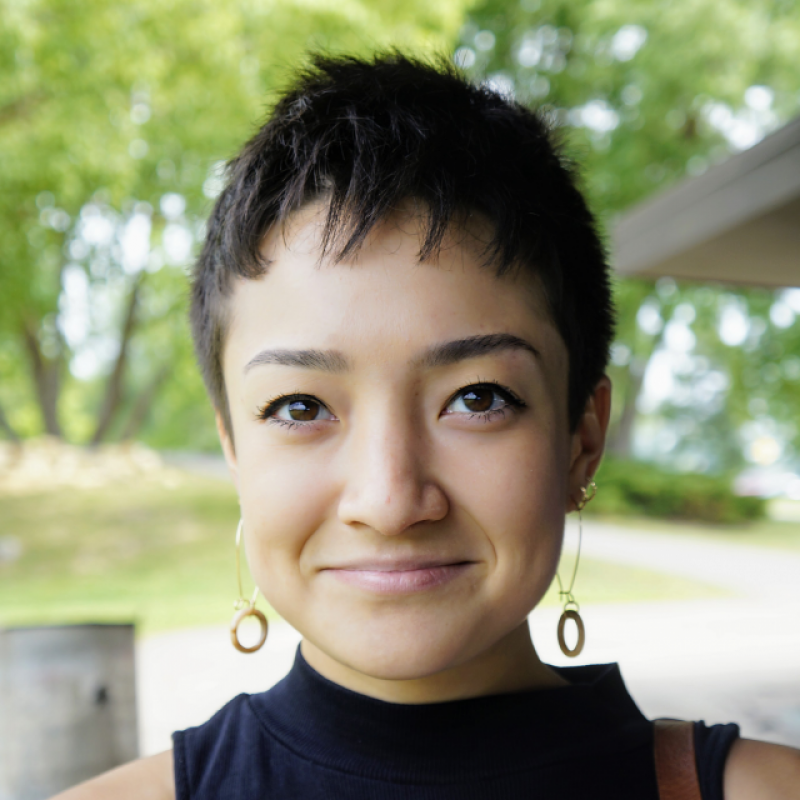 END_OF_DOCUMENT_TOKEN_TO_BE_REPLACED

It's Winter... Put Yourself Out There