The North Shore of Lake Superior is one of Minnesota's most rugged and beautiful landscapes. This rocky coastline from Duluth to the Canadian border is the perfect place to cool off, catch the fall colors and get off the grid with a few nights of camping. Here are eight Minnesota State Parks along the North Shore where you can camp, hike and go chasing waterfalls.

Considered the gateway to the North Shore, Gooseberry Falls is the first of eight Minnesota State Parks you'll encounter heading north from Duluth along Highway 61. Located in Two Harbors, this well-loved green space is renowned for its picturesque waterfalls and scenic hiking trails. Hike the 3-mile trail loop to reach the upper falls, where you can spot passing ships and alpine-arctic plants unique to the area because of the cold temperatures and proximity to the lake.

Most campers at Gooseberry will end up at one of the park's 69 drive-in sites, four of which are designated as wheelchair accessible. For the RVers, there are three pull-through sites at Gooseberry and the RV length limit is 40 feet. Larger groups can also book one of three group camps, which are tent-only and can accommodate up to 50 people.

Visitors travel from all over to take in the unparalleled Lake Superior views from Split Rock Lighthouse State Park. The park's namesake lighthouse is situated atop a 130-foot tall cliff, built after a devastating 1905 storm sank seven ships within a dozen miles of the Split Rock River. The lighthouse was manned for 59 years to prevent watercraft from beaching on the rocks.

Today, the lighthouse is a National Historic Landmark, and the park offers 12 miles of hiking trails along the coastline that connect to the Superior Hiking Trail (SHT). Visitors can tour the lighthouse to see the 1000-watt bulb and take in views of, “the most dangerous piece of water in the world.” Split Rock is a popular park during all seasons and provides quiet, chilly cross-country skiing during the colder months.

There are 20 cart-in sites, four backpack sites and two wheelchair accessible options available at Split Rock. Two of the backpack sites are accessible directly from Lake Superior, offering the perfect home base for kayakers, canoers and stand-up paddleboarders. For optimal privacy, book site 20, where you can enjoy being at the top of a peninsula overlooking the water. Past visitors recommend checking out Corundum Point, which provides a 180-degree panoramic view of Lake Superior.

People visit Tettegouche State Park to take in the lake views and see Baptism River’s 60-foot falls, the highest waterfall located entirely within Minnesota! Peeking up in the distance, you can also spot the Sawtooth Mountains: a low ridgeline just inland of Lake Superior that's home to much of the SHT. Tettegouche has four-season trails perfect for hiking and viewing hare, moose and bear. The park was designated in 1979 to preserve the area, which was once used by Algonquin Native Americans and eventually by Duluth businessmen as a base for fishing trips.

There are 28 drive-in sites that offer privacy and wooded drives along the Baptism River, all but six of which have electricity. There are also five first-come-first-served backpacking sites along the SHT. Visit in the summertime to enjoy wildflowers, and stay at sites 20 or 22 for the fastest access to the waterfalls. Make sure to bring a fishing license and poles to catch a delicious meal of perch, bass or northern pike!

Silver Bay is home to two Minnesota State Parks, the first of which is George Crosby Manitou. Named after a mining merchant who played a major role in developing the Mesabi and Cuyuna iron ranges, this 3,320-acre park on the Manitou River is the pinnacle of North Shore wilderness. This rugged, off-the-beaten-track park boasts 24 miles of back-country hiking trails that offer incredible wildlife observation and scenic waterfalls. Kayakers and stand-up paddleboarders also enjoy exploring the calm waters of Benson Lake in the middle of the park.

Designated as a backpack-only park, the campsites here are secluded, primitive and beautiful. There are 21 remote sites located between a half mile and 4 ½ miles away from the parking area. Most spots are near Benson Lake or the Manitou River, providing fabulous views and freshwater breezes. The bathrooms here are field latrines, so don’t count on showers or running water. Plan to hang your food and toiletries as there are no bear lockers. Some sites have access to drinking water, so call the ranger station ahead of time to select the spot that suits your needs.

Also in Silver Bay, Temperance River State Park has beautiful views of Lake Superior and a sandy beach where you can wade into the water, search for agates or skip rocks. Most visitors walk the trails along the Temperance River Gorge, which feature rushing waterfalls and a dense North Woods forest of pine, spruce, cedar and birch trees. Climbers dig visiting Carlton Peak, a 1,078-foot bouldering wall with seven routes in the anorthosite rock. This material is very abrasive, so make sure to wear durable clothing.

There are two drive-in campgrounds at Temperance River: an upper and a lower. Some sites at the lower campground offer views of the lake where you can enjoy breathtaking sunsets and the relaxing sounds of the water. Reserve a spot at the upper campground if you need electricity. Both campgrounds have shaded sites perfect for summer and fall heat. For RVers, there are two pull-through sites and an RV length limit of 60 feet. Six walk-in sites offer solitude and quiet with access to carts to haul gear. Campsites 14 and 25 have trail access, so stay there if you want to hike right from your tent site. Avoid the duo if you’d like a more private experience.

Named for the rushing river that weaves its way through its hilly terrain, hike the trails at Cascade River State Park to see five small waterfalls and bask in the park's lush boreal forest. The area is full of black volcanic rocks that were deposited here around 1.1 billion years ago. The forest features ferns, pine and aspen trees and surrounds the river, which has an exciting footbridge. Hike 18 miles of designated trails or snowmobile 2 miles of groomed trails to enjoy the park in all seasons. Far from any light pollution, Cascade River is a great place to see the Northern Lights in Minnesota.

There are 40 year-round drive-in campsites, plus five backpacking spots and two group sites. Tenters can choose from electric or non-electric campsites and access rustic vault or modern toilets and showers during the summertime. If you want a rugged site, haul your gear up the SHT to Lookout Mountain, where you can set up hammocks or tents at a backpacking site many don’t know exists!

Located in Grand Marais, Judge C.R. Magney State Park is best known for the mysterious Devil’s Kettle Waterfall. As the Brule River makes its way through the park, it splits into two separate waterfalls. The east side of the river falls 50 feet straight down, with nothing mysterious about it. However, the western branch of the river seems to disappear completely into a huge, volcanic pothole.

Rumors speculated that the water makes its way to Canada, but hydrologists have proven that the water flows into the Brule River via an underground channel. They tested the theory in 2017 by pouring vegetable-based dye into the top of the falls and finding traces of the color in the river downstream.

The campground features 27 private, wooded drive-in sites. Take a shower and enjoy modern plumbing after hiking on the SHT, which loops through the day-use area.

Grand Portage State Park features the highest waterfall in the state: the Pigeon River’s 120-foot High Falls, which is likely around 9,000 years old and sends water between Canada and Minnesota. In the past, Anishinaabe Native Americans and European fur traders portaged (walked their canoes and belongings) around the falls to use the water as a method of transport. Visitors today can walk the half-mile trail to the overlook to see the many channels of Lake Superior.

Keep an eye out for great blue herons and black bears among the pines, birch and aspen trees. Photographers and hikers interested in landscapes and wildlife often consider this a favorite spot along the North Shore.

There are no campsites directly at Grand Portage, but you can stay the night at Grand Portage Marina RV Park just 6 miles away. The facility features full hookups and restrooms for RV camping, plus lodgers can use the pool and sauna at the Grand Portage Lodge. 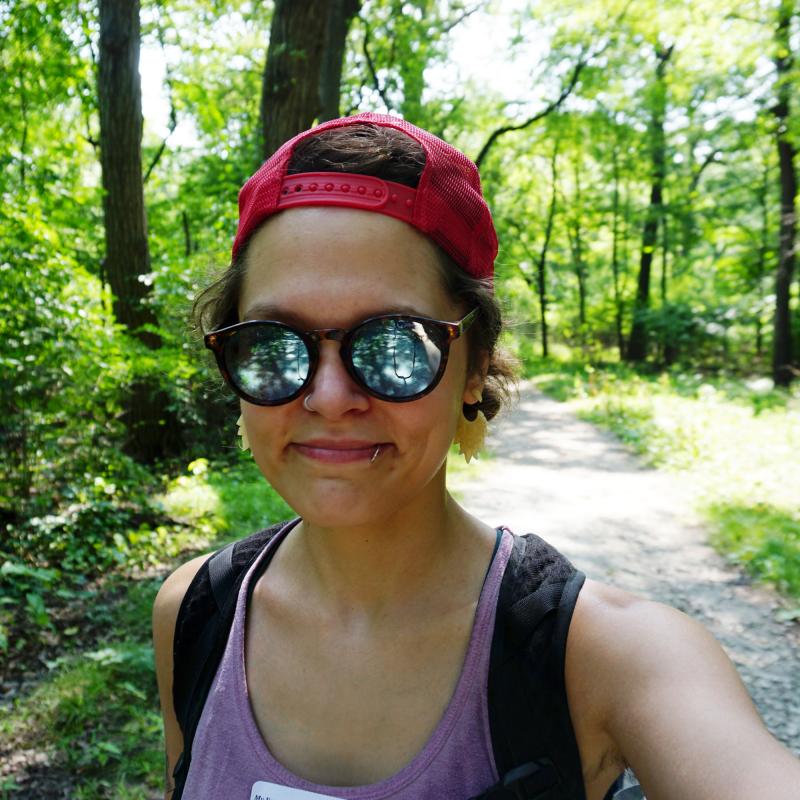 Hatie Parmeter is an outdoor instructor and writer who loves the Midwest. She enjoys paddling in the BWCA and introducing people to the Chicago River.

Create Your Adventure in the Boundary Waters

END_OF_DOCUMENT_TOKEN_TO_BE_REPLACED

Uncover the Secrets of Spring

END_OF_DOCUMENT_TOKEN_TO_BE_REPLACED

Put Some Wild in Your Winter